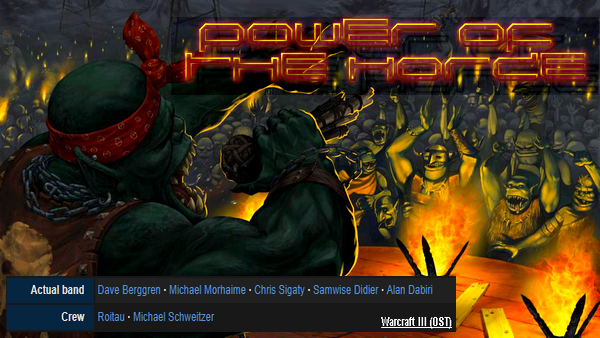 Greetings, dear friends of our iCCup Gaming Platform. Above all we wish you good health and better days! Let's remember the past… > Power of the Horde

''Power of the Horde" is the debut song by Level 80 Elite Tauren Chieftain, released with Warcraft III: The Frozen Throne on July 1, 2003, where it is featured during the expansion's credits. The song «appears» on the band's fictional 2003 album, also titled Warcraft III: The Frozen Throne. A BlizzCon 2005 announcement jokingly asserts the song a «multimillion-selling» single, and the fictional album it derived from as best remembered for the «popular little computer game» that was included with it as a bonus feature, while these «facts» were quite the opposite in reality (the song itself included as a bonus to the highly popular Warcraft III: Reign of Chaos expansion).

i remember hearing this at end of WCIII campaign. Epic <3

World of warcraft battle for azeroth :)