Sina Games is a Chinese game company that operates under Sina Corp. Blizzard said in its lawsuit that the company frequently bases its mobile and browser games off popular franchises, including Pokémon and Warcraft. Glorious Saga, a free-to-play game, was previously available on mobile and in browsers; it was described by the developer as a “real time strategy game for building an empire.”

Blizzard alleged that Sina Games have “profited handsomely” from the game due to its characters’ likeness to Warcraft characters. Not only does Glorious Saga appear to pull imagery from Warcraft, but Blizzard said some character names, like

used in the game.

per each individual case of infringed work, in addition to compensation for legal and other fees related to the case. Blizzard

alleges that every single monster, creature, animal and vehicle as well as many items and sounds were copied from Warcraft. While the breadth of the infringement will need to be decided in court, the repurposing of Blizzard's designs and ideas will be immediately apparent to anyone with some familiarity with the Warcraft series after watching footage the game being played. 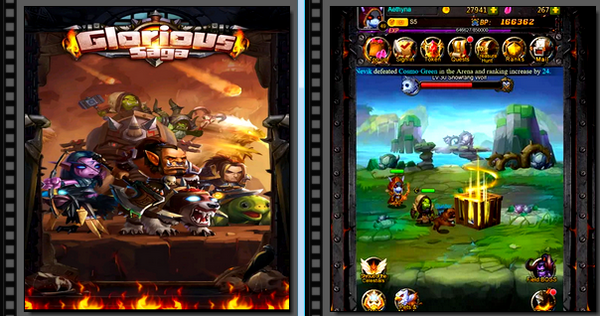 Since the lawsuit was filed, Sina Games

has taken Glorious Saga offline. In a post on Facebook the company explained all servers have been switched off, but stopped short of confirming the move was in response to the lawsuit.

Glorious World describes itself on the Google Play storefront as “a serious [sic] of free rpg game developed by instantfuns”. At the time of writing, 41 reviews have awarded it 2 stars out of 5, with many commenters complaining that it “rips off” World of Warcraft.

Sina Games is a subsidiary of Sina Corp. and Blizzard also alleges that «many» of the company's games are based off of existing properties, including Yu-Gi-Oh! and Naruto.

I swear it's nice game xD

Plus BlizAre has aTrademark In China since they do have a Chinese version of the game on the market. Blizzard can totally sue them.

Wow. Just a watched a gameplay video on this. It legit is all the characters (sylvanas, anduin, etc) from warcraft and Wow. Shame :super