Blizzard -A Legacy of Controve

A potential international incident started on Tuesday, when one Reddit user posted, “It would be such a shame if Mei from Overwatch became a pro-democracy symbol and got Blizzard's games banned in China.”

If your head started spinning when you read that, let me explain. First, some definitions: Overwatch is a popular video game made by Blizzard Entertainment, part of the $41 billion company Activision Blizzard, which sells games and has business partners in China. Mei is a parka-clad, icicle-shooting Chinese character from Overwatch. China is a country whose government has recently proven to be quite sensitive about pro-democracy symbols and speech, and willing to punish companies that speak out against it.

The Reddit call-to-arms came in the midst of another controversy involving an American entertainment property angering the Chinese government. A week ago, Daryl Morey, the general manager of the NBA's Houston Rockets, tweeted support for the protestors in Hong Kong. Despite the league's self-flagellating attempts to defuse the political situation, the Chinese government began tearing down NBA posters and cancelling exhibition games. Meanwhile, Democrats and Republicans came together to upbraid the league for its mealy-mouthed response.

Apparently realizing that it couldn’t please both sides, the NBA attempted to pivot towards support for U.S.-style freedom of speech. It seemed to do so reluctantly. When a CNN reporter asked players about the situation during a press conference on Thursday, a league employee stopped them from answering. (An NBA spokesman later apologized.) 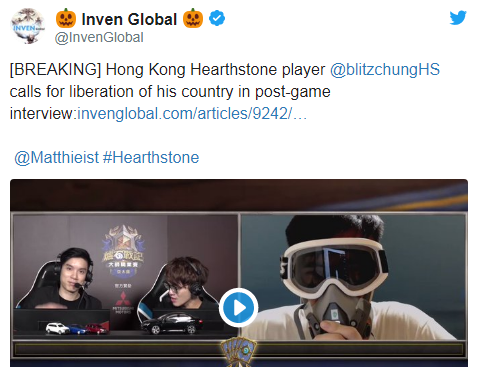 There’s still plenty of drama to unspool in the basketball world, but a more extreme example has played out in gaming. Blizzard recently banned a player from its Hearthstone esports league and revoked $10,000 in prize money after the player expressed his support to the Hong Kong protesters. Blizzard also fired two live commentators for letting the protest take place on their watch. In a video, you can see them duck under a table as the player, Ng Wai Chung, shows his support for the Hong Kong protesters. .

Senator Marco Rubio criticized Blizzard for the Hearthstone ban, tweeting in part, “People who don’t live in #China must either self censor or face dismissal & suspensions. China using access to market as leverage to crush free speech globally." Senator Ron Wyden joined in saying, “Blizzard shows it is willing to humiliate itself to please the Chinese Communist Party. No American company should censor calls for freedom to make a quick buck.”

The company has been largely silent about its decision (it didn’t return my request for comment). A small group of its employees staged a walkout Thursday in protest. Gamers have also been in uproar. 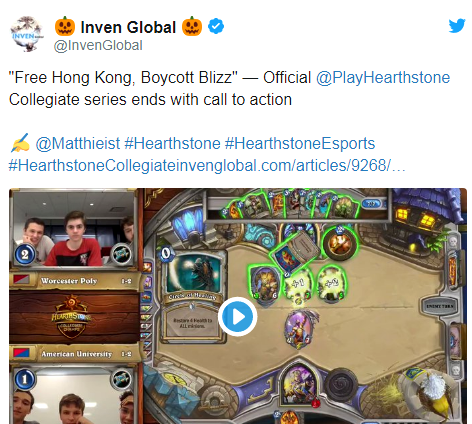 Which brings us back to Mei. Images of the character as a pro-democracy activist have begun popping up all over the internet. In one, she wears a mask saying “Fight for Freedom Stand with Hong Kong;” another shows her holding an umbrella that says «democracy now.” Video game sites like Polygon have written about the protest, and Reddit has taken it up as a crusade. One Reddit user posted a video using Blizzard-created content, transformed into a pro-Hong Kong tribute.

China has already shown intolerance for subversive cartoon characters. It began restricting images of Winnie the Pooh in China when the stuffed bear became a digital stand-in for President Xi Jinping. The fan-art protests could put Blizzard in an uncomfortable situation by transforming its character into a protest symbol, too. Might the company soon be compelled to censor its own creation?

Blizzard isn't the only business tangled up in the Hong Kong protests. Apple, Google and the NBA have all found themselves in the middle of political tensions between Hong Kong and China.

With this news I am reminded of Totalbiscuit, and often wonder what his reaction to the current gaming climate would be